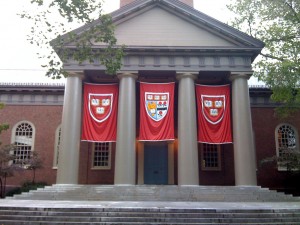 Harvard University established in 1636 is perhaps the oldest university of higher education in United States of America. It was founded by vote of the Great and General Court of the Massachusetts Bay Colony, making it the most ancient institution of higher learning in the United States. Initially known as “New College” or sometimes “the college at New Towne”, the institution changed its name to Harvard College on March 13, 1639. One of the Ivy League research universities, it is located in Cambridge, Massachusetts. It is named after the young minister John Harvard of Charlestown, an English clergyman from Southwark, London; He was an alumnus of the University of Cambridge and was also the university’s first benefactor. On his death in 1638 he donated the College his library of four hundred books and £779 pounds s which was half of his assets. Today a statue of John Harvard still stands in the University Hall in the Harvard Yard and is undoubtedly the university’s most famous landmark.

Harvard University has had an interesting history over its almost 400 years since being established. The first class consisted of only 9 original students who were taught science, math astronomy and more from Reverend Henry Dunster when he became president at age 31.

Harvard University was founded in 1636, making it the oldest college in America.

Harvard has an interesting and complicated history involving power struggles between faculty members as well as with its surrounding communities, especially during times of war.

In order to survive financially through most of its existence Harvard relied on donations from wealthy individuals who were able to provide financial support for both students and professors alike. In addition there have also been some notable people such as John Quincy Adams’s wife Louisa that have attended or taught at HU over time . During World War II many classes were cancelled so instead those years turned into a great opportunity for learning how to serve one another better within the community which is still practiced today by offering free tutoring services among other opportunities.

The charter which led to creation of the corporation of Harvard College came in 1659.  During the early years of its establishment the college trained many Puritan ministers. Harvard University was never initially affiliated with a church but students during 18th and 19th century became secular.  The college offered a traditional academic course based on the British university model since many leaders in the colony had attended the University of Cambridge. According to one of the early university’s brochures published in 1649 the college was established to advance learning and bring about enlightenment.

After the American Civil War the President Charles W.Eliot transformed the college and its affiliated professionals schools into a centralized single research university and Harvard became the founding member of the Association of American Universities in 1900. During the Great Depression and World War II the university was led by James Bryant Conant who also began to alter the program of study and liberalize admissions after the war. He saw higher education as an essential tool of enlighten not just the wealthy but also devised programs to identify, enroll and support talented youth. He reinvigorated scholarships to guarantee   the university’s superiority among other research universities. After its 1977 merging with the Radcliff College the undergraduate college became coeducational

Today the Harvard University has 12 degree-granting schools in addition to the Radcliffe Institute for Advanced Study. The University has developed from only nine students with a single professor to an enrollment of more than 20,000 degree candidates including undergraduate, graduate, and professional students. More than 360,000 living alumni are present in the U.S. and more than 190 in other countries. Its rich and strong history, matchless quality of education, academic influence, and wealth has made it one of the most prominent and prestigious universities in the world. The university offers 46 undergraduate majors 134 graduate degrees and 32 professional degrees. Harvard also has the largest financial endowment of any academic institution in the world, positioned at about $30.4 billion. The main campus of Harvard University is centered on Harvard Yard in Cambridge which is about 3.4 miles northwest of downtown of Boston and is expanded into the Harvard Square neighborhood. The central Harvard Yard consists of all the administrative offices and main libraries, academic buildings, Memorial Church and a few of freshman dormitories. The Harvard University has been ranked high by many international rankings in fact it is globally accepted as the best university of the world and not just the oldest university of United States of America.

Harvard is a place to make great memories and lifelong friends. The dorms are filled with people from all over the world, who will likely become business leaders or politicians in their own countries one day. It’s not hard to find fellow students studying for finals at 2 am when everyone else has gone home for winter break.

Harvard is a place where you create great experiences on top of making life-long friendships along the way! You’ll meet someone new everyday as each student comes from different places around the globe, many even becoming political/business leaders.

Harvard is known for its many traditions and unusual school life. They also have a “dining society” called The Signet Society where you can only be invited if your family name starts with A-L & M-Z (Aardvark). There are various clubs in Harvard that allow students who share similar interests to meet other like minded people and work together toward improving their skills.

How do you apply to Harvard

Harvard is a great school that offers many opportunities to students. If you want get into this prestigious university, then it’s good idea to study for the SATs and take AP classes in high school. You should also have an active extracurricular life so your application will stand out among others because Harvard looks at more than just academic scores when deciding who gets accepted onto their campus.